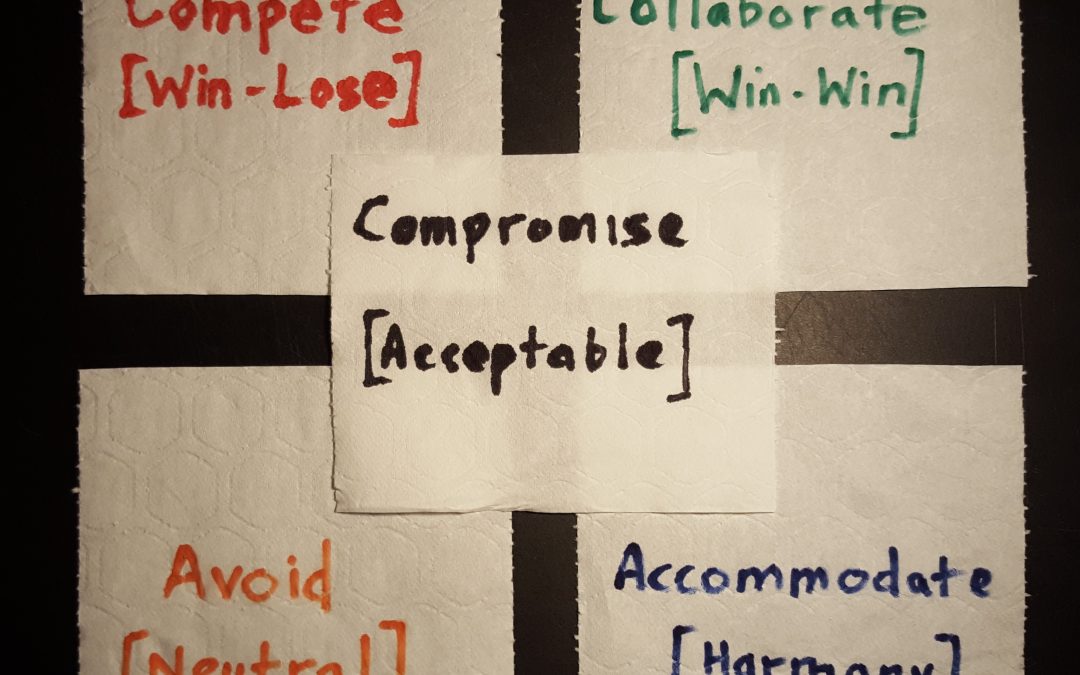 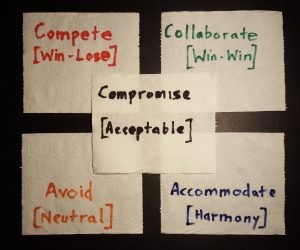 As the UK gets closer to going into lock-down we see some interesting phenomenon arising. One that is prevalent in media coverage is CTRH (Coronavirus Toilet Roll Hoarding).  In his work on Survival Of The Fittest, Darwin wrote about stocking up on toilet roll as one of those instinctive animal behaviours we all possess alongside “fight or flight”. What does it teach us about conflict?

Conflict is one of those words that lots of people don’t like. It conjures up the thought of war, conflict on a serious and major scale. Is that the true meaning of the word?  Should that colour how we respond to and deal with situations where our concerns or desires differ from those of somebody else?

I’m reminded of the time a couple of years ago when a colleague and I were delivering some personal skills training for an IT management team. I was covering a point about proactive progress reporting using an example of being caught up in a traffic jam on the motorway. It’s better to phone the people who are expecting you and make them aware you’re going to be late, rather than leave them wondering where you are and what has caused your delayed arrival.

To help with my illustrative story I asked the room what I thought was a very innocuous question. “Where’s the A1 from here?”

Oh no!  I’d just sparked a very passionate argument between two of the course attendees.

And so it went on, despite my attempts to quell the head-to-head confrontation and move on with the training session. Eventually, we managed to get everyone to settle back into their chairs and returned our attention to the learning material.

Both individuals were so focused on being right (the result, the outcome).  It didn’t matter whether they hurt the other person’s feelings or not.

I, on the other hand, was not in the least bit bothered about who was right or wrong.  It really wasn’t important for my story.  I was more concerned with restoring harmony in the room.

They were “competing” and I was “accommodating”.

As it happens, they had a great working relationship and this heated argument showed they had a really strong bond.  They were capable of addressing differences of opinion without falling out over it. The drawback was that they had just derailed the training session for five minutes.

Like everything, competing (“I win, you lose”) can be both appropriate and inappropriate, depending on the situation. The New Zealand All Blacks rugby players walk onto the field looking for nothing other than a win, even though they might by close friends with some of the opposition team. Compromise is unthinkable.

So, what conflict style does the referee exhibit? He (for it is usually a he) doesn’t have any concern for winning. The final score doesn’t matter to him. Nor does he want to get too concerned about anyone’s feelings as that could sway his judgment and result in partiality. So, he remains neutral and his behaviour is an example of “avoiding”.

Back to our Toilet Roll Hoarders. Like the All Blacks, they are competitive. “Must get to the shops early, love, so that we get more than our necessary share of the toilet rolls. I don’t care if everyone else misses out.”

What’s annoying is the lack of reasonableness. Is there really going to be a world shortage of loo paper? Not according to one of my friends who works in that industry.

How does society respond?

Firstly, by applying some additional rules and controls to force a degree of compromise. Limit the number that can be purchased by any one individual. Set aside an hour early in the day when only the elderly are allowed into the store.

Secondly, we see volunteers offering to support the “at-risk” people by doing some shopping for them. They get a feelgood factor for their troubles. It’s more about “win-win”.

An example of co-lav-oration?   (Apologies for the poor play on words!)

When you’re at work, you’ll have to deal with minor conflicts all the time. Remember:

If you’re interested in developing the interpersonal skills within your IT team, please get in touch and tap into our IT management experience. You can also take a look at our other best practices blog articles which are full of insights, hints, and tips.

Strong Supplier Management is key to any “Cloud first” strategy 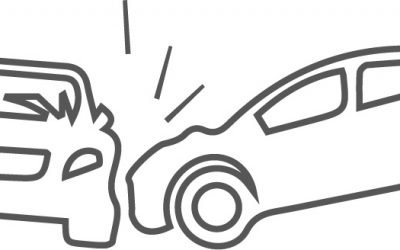